Centuries ago, humanity fled to Beacon, an alien planet caught in a permanent eclipse. What happened then is lost to the ages. What remains survives in the shadow of giants, worn away by time, bolstered solely by the promise of a better tomorrow.

In this place players will confront issues of trust, form pacts, and pursue personal goals to further their story and cement the bonds that bind them.

Take flight in a novel fantasy Forged in the Dark and usher in a new age of human achievement.

All the rules you'll need to play Moth-Light on Beacon.

Background on the setting, including the peoples of Beacon, the role of predecessor technology in the game, and more.

Guidelines on how to interpret post-fall tech in your game.

Instructions on how to create Pacts, pull Strings, and craft Beliefs.

Two Pact Sheets to track your quest's progress. Play as members of ...

Nine playbooks in booklet format including ...

New Pact Sheets each with a novel narrative focus! Play as Slayers, Jammers, Moth-Riders and more.

Following are links to character keepers and electronic sheets for the various pacts and playbooks. To use these sheets, simply copy them to your google drive and change the permissions to allow for editing.

Based on the systems and rules created for  Blades in the Dark, by John Harper, and published by Evil Hat.

Thank you so much for your encouragement and financial support

Hacked in the Dark Moth-Light Stream

In order to download this Tabletop RPG you must purchase it at or above the minimum price of $10 USD. You will get access to the following files:

Support this Tabletop RPG at or above a special price point to receive something exclusive.

Every full-price copy of Moth-Light you buy helps someone else grab a free copy if their budget doesn't enable them to pay the listed price. If you're unable to budget for a copy of Moth-Light priced as listed, please claim one of these free copies for the community.

Nice work! I like the Pact Sheets and simple but efficient Session Zero process. The amount of detail you put into the book to help players get it right and ease the learning curve is great.

Hello, in the Moth-Light book, on the second-to-last page, it says that a custom playbook sheet is available with special instructions for character creation on it. Where can we find this sheet?

So if you download the printable sheets in the demo section the last play sheet has various fields that are blank so you can customize them as needed. If you’d like a template for your own use I could possibly make one up.

PS I saw your comment on proofing and editing is one of the very last steps in creating a game which means, unfortunately people will have to put up with some bad grammar and inconsistencies for a while more.

If if is possible to have a template that would be wonderful! And no worries, I totally understand.

Hi. What's happening with those multiple 1.9b files? Itch.io keep saying me that there are new files, but I still see 1.9b.

Apologies. Sometimes I go a bit overboard with editing and wind up re-uploading the current version to fix a minor issue that isn’t deserving of a new version number. I’ll try to exhibit some self control.

:) No need to apologize! Love your commitment. PS: I still see 2 different 1.9b files in the download page. One is a 4MB file, the other one is way more bigger.

One can only dream, but a future crowdfunding campaing with the possibility to pledge for a physical version would be a great piece of news!

Thanks for your interest! I’m actually working on a content update right now that will include major edits, an overhaul of the stress system, an entirely new mechanic called Vision, and two additional pacts bringing the Google doc up to about 240 pages.

My goal is to get the game as close to edit ready as possible before crowdfunding as I’m the sole designer on this and it’s sort of my design baby.

I really want to see it get a proper print run at some point.

I came here just after reading the devlog update! It looks amazing!

I will check it out asap. You are doing an amazing work all by yourself.

I will be looking forward for that print run, but I understand you want the game to be as good as it can be, so no rush.

In any case, thank you for your answer and your work. Keep it up!

I am quite enjoying my read of Moth-Light and I hope to get to play it soon (got a few peeps interested already hehe). What an inspired and inspiring game!

I have a specific question about derivative work: I am writing a game and one of the things you are schooling me on is making concise blocks of rules and wording. So I'd like to know how to approach getting inspired by/templating off sections of your game to write my own game.

Example: The section on rolling the dice does a neat job of explaining how to roll the dice. I wouldn't just copy/paste the page, but there are sentences I'd like to use or edit. How would that go with you?

I absolutely encourage you to do that! My only request would be that you offer attribution if any rules text you copy makes it into the final version of your game.

Absolutely yes! Is there any format you'd prefer?

For now, wing it. I'll have more formal guidance on this in the final draft.

Question about The Brand playbook: under Trappings, Common Sense is crossed out. What does that mean? Is it not available to be used? Or is that a sort of ironic stylistic choice?

Oh this is definitely intentional irony on my part. Basically it implies this playbook lacks common sense. The Brand kind of fits the brash-acting hot-head trope.

The double irony is that, due to it being a trapping, players can leverage their lack of common sense to gain extra effect on rolls! Hope that clears things up. Sometimes you've gotta get creative to fit all those words on the character sheet.

Gotcha! Thanks for the clarification! I would not have been able to figure it out otherwise XD

That's good feedback! I'll make sure it's clear in the book text and look into ways to clarify it on the character sheet.

Awesome! I'm really loving the setting and pacts right now. Excited to see the next version as well!

Hi Justin. I plan to start a campaign in Moth-Light soon (January 2021, maybe later). I would like to ask you about possible Roll20 character (and Pact) sheet. It would really help my technical preparations

Hi, Mansfield! Firstly, thank you so much for running the game! Know that I’m planning a big update shortly (before the end of the year, maybe even in the next week).

In that time I’ll be updating the google sheets and looking into making sheets for the Role App, but I don’t have much experience making sheets for Roll 20. It’s ok my horizon but likely something that will happen closer to the Kickstarter unless an enterprising fan lends me a hand. I’ll ask around and see how plausible it would be to whip something together. ✨

While I can't offer a roll20 template at the moment (it takes a LOT of time and effort to make a good roll 20 template) I hope you will enjoy the new format for my google sheets, recently updated, found in the demo section. I'm also working on a template for the Role App, if that is of interest! (https://app.playrole.com/)

For your perusal, here is a direct link to the Promise pact g-sheets: https://docs.google.com/spreadsheets/d/1DeA_gY1NnS7e_sXb7iKr29rqQAEYwn8yM8YYH5LY..

Hi Justin. Pag. 70, the RUIN explaination mentions "ruin" again, while the other skill (as in BitD) always suggest a different skill better suited for a not-so-ruin action.

I'll correct it! If anyone has editing comments, happy to receive them via my email (listed in the first few pages of the game doc and on my designer page).

I did a looong email, giving you all the feedback I can. I'd just to be sure you received it, 'cause I had no ping back. Thanks for the attention.

Yes! I received your email. I’m currently in the middle of a rules revision and overhaul that may address some of your thoughts. Sorry for not getting back sooner ✨

Hi, Andrea! I haven’t forgotten about you. This latest update might address some of the thoughts you had posed to me. I’ll address the rest in an email ✨

This game does some really clever new things with the Forged in the Dark model that I hope ripple out and inspire other designers the way they have me! The setting is really rich and permeates through the rules and text in a way that is really masterful (even as the writer says setting and lore will be developed further!). Similarly, the design and layout are on point and look very pro, especially for something that is still in development.

Super impressed by this whole game and eager to see how it continues to grow. 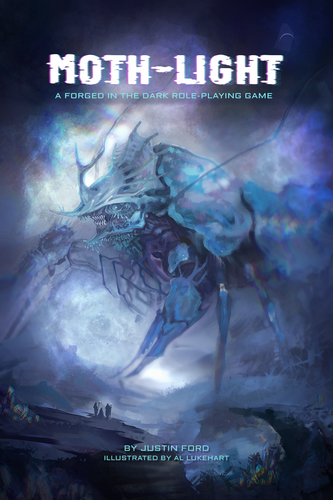 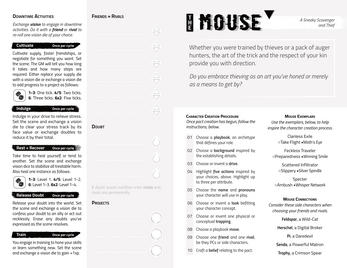 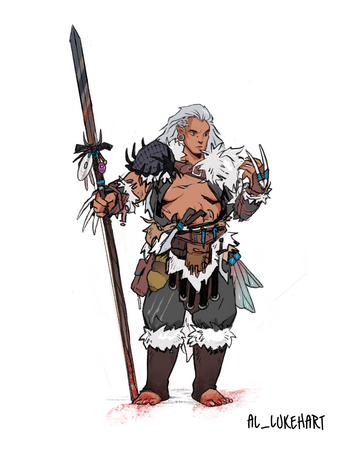 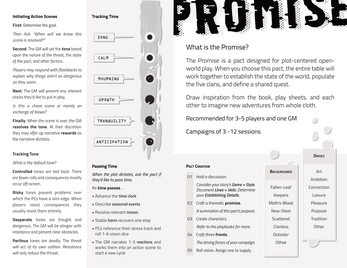 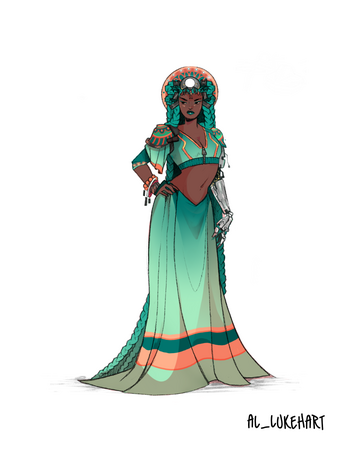 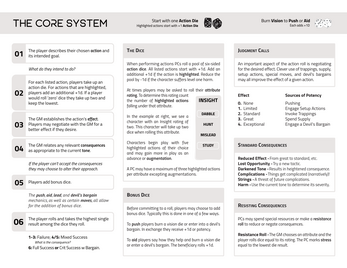 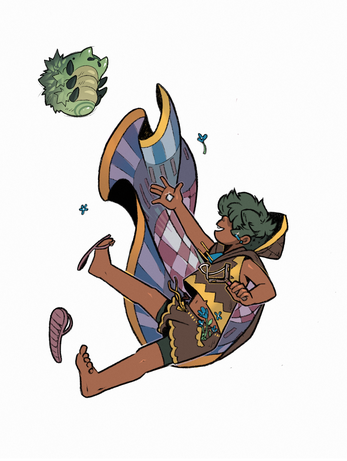 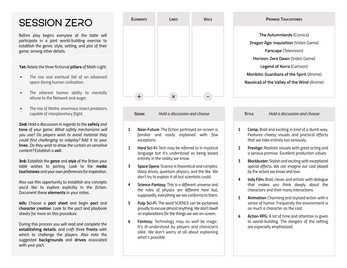 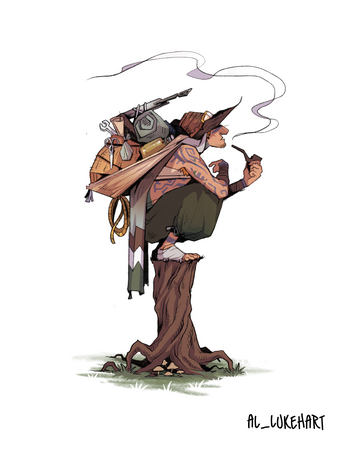